WELCOME TO THE KING SOLOMON GROUP.

I INVITE YOU ALL TO CONTRIBIUTE AND SHARE WISDOM ABOUT KING SOLOMON SO WE ALL CAN LEARN FROM EACHOTHER.
NAMASTE

Solomon was born in Jerusalem,[7] the second born child to David and his wife Bathsheba, widow of Uriah the Hittite. The first child (unnamed in that account), a son conceived adulterously during Uriah's lifetime, had died before Solomon was conceived. Solomon had three named full brothers through Bathsheba, Nathan, Shammua, and Shobab,[8] besides six known older half-brothers through as many mothers.[9]

Cornelis de Vos, The Anointing of Solomon . According to 1 Kings 1:39, Solomon was anointed by Zadok.

According to the biblical First Book of Kings, when David was old, "he could not get warm."[10] "So they sought for a beautiful young woman throughout all the territory of Israel, and found Abishag the Shunammite, and brought her to the king. The young woman was very beautiful, and she was of service to the king and attended to him, but the king knew her not."[10]

While David is in this state, court factions are maneuvering for power. David's heir apparent, Adonijah, acts to have himself declared king, but is outmaneuvered by Bathsheba and the prophet Nathan, who convince David to proclaim Solomon king, despite his being younger than his brothers.

Solomon begins his reign with an extensive purge, including his father's chief general, Joab among others, and further consolidates his position by appointing friends throughout the administration, including in religious positions as well as in civic and military posts.

Solomon greatly expands his military strength, especially the cavalry and chariot arms. He founds numerous colonies,some of which doubled as trading posts and military outposts. Trade relationships are a focus of his administration. In particular he continues his father's very profitable relationship with the Phoenician king Hiram of Tyre; they send out a joint expedition to the land of Ophir to engage in the trade of luxury products, importing gold, silver, sandalwood, pearls, ivory, apes and peacocks. Solomon is considered the most wealthy of the Israelite kings named in the Bible.

He also builds the First Temple, beginning in the fourth year of his reign, using the vast wealth he has accumulated. 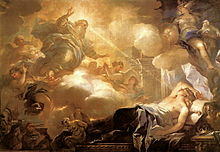 Solomon is the Biblical king most famous for his wisdom. In 1 Kings he sacrifices to God and prays for wisdom. God personally answers his prayer, promising him great wisdom because he did not ask for self serving rewards like long life or the death of his enemies. 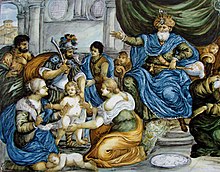 The judgment of Solomon, painting on ceramic, Castelli, 18th century, Lille Museum of Fine Arts Perhaps the best known story of his wisdom is the Judgment of Solomon; two women each lay claim to being the mother of the same child. Solomon easily cuts through the dispute by commanding the child to be cut in half and shared between the two. One woman promptly renounces her claim, proving that she would rather give up the child than see it killed. Solomon declares the woman who showed compassion to be the true mother, entitled to the whole child.

Solomon is traditionally considered the author of several Biblical books, "including not only the collections of Proverbs, but also of Ecclesiastes and the Song of Solomon and the later apocryphal book the Wisdom of Solomon.

According to the Bible, Solomon had 700 wives and 300 concubines. The wives are described as foreign princesses, including Pharaoh's daughter and women of Moab, Ammon, Sidon and of the Hittites. The only wife mentioned by name is Naamah the Ammonite, mother of Solomon's successor, Rehoboam. The Biblical narrative notes with disapproval that Solomon permits his foreign wives to import their national deities, building temples to Ashtoreth and Milcom.

Relationship with Queen of Sheba

The Visit of the Queen of Sheba to King Solomon', oil on canvas painting by Edward Poynter, 1890 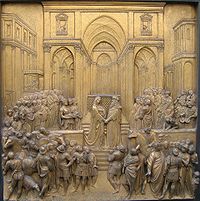 In a brief, unelaborated, and enigmatic passage, the Hebrew Bible describes how the fame of Solomon's wisdom and wealth spread far and wide, so much so that the queen of Sheba decided that she should meet him. The queen is described as visiting with a number of gifts including gold, spices and precious stones. When Solomon gave her "all her desire, whatsoever she asked," she left satisfied (1 Kings 10:10).

Whether the passage is simply to provide a brief token, foreign witness of Solomon's wealth and wisdom, or whether there is meant to be something more significant to the queen's visit is unknown; nevertheless the visit of the Queen of Sheba has become the subject of numerous stories.

Sheba is typically identified as Saba, a nation once spanning the Red Sea on the coasts of what are now Eritrea, Somalia, Ethiopia and Yemen, in Arabia Felix. In a Rabbinical account (e.g., Targum Sheni), Solomon was accustomed to ordering the living creatures of the world to dance before him (Rabbinical accounts say that Solomon had been given control over all living things by Yahweh), but one day upon discovering that the mountain-cock or hoopoe (Hebrew name: shade) was absent, he summoned it to him, and the bird told him that it had been searching for somewhere new.

The bird had discovered a land in the east, exceedingly rich in gold, silver, and plants, whose capital was called Kitor and whose ruler was the Queen of Sheba, and the bird, on its own advice, was sent by Solomon to request the queen's immediate attendance at Solomon's court.

An Ethiopian account from the 14th century (Kebra Nagast) maintains that the Queen of Sheba had sexual relations with King Solomon and gave birth by the Mai Bella stream in the province of Hamasien, Eritrea. The Ethiopian tradition has a detailed account of the affair. The child was a son who went on to become Menelik I, King of Axum, and founded a dynasty that would reign as the first Jewish, then Christian Empire of Ethiopia for 2,900+ years (less one usurpation episode, an interval of c. 133 years until a legitimate male heir regained the crown) until Haile Selassie was overthrown in 1974. Menelik was said to be a practicing Jew who was given a replica of the Ark of the Covenant by King Solomon; and, moreover, that the original was switched and went to Axum with him and his mother, and is still there, guarded by a single priest charged with caring for the artifact as his life's task.

The claim of such a lineage and of possession of the Ark has been an important source of legitimacy and prestige for the Ethiopian monarchy throughout the many centuries of its existence, and had important and lasting effects on Ethiopian culture as a whole. The Ethiopian government and church deny all requests to view the alleged ark.[a]

Some classical-era Rabbis, attacking Solomon's moral character, have claimed instead that the child was an ancestor of Nebuchadnezzar II, who destroyed Solomon's temple some 300 years later.[12]

THE INVOCATION OF SOLOMON PART 1

This lecture is a continuation of “The Prayer of the Lord,” which helps to understand more deeply who “the Father” is; it helps to comprehend our real Being — in other words, our real self, who is, “our Father who art in heaven.” In Gnosis, we…Continue

The Good Force be with you!These are the My Modern Wise Sayings -1. The beginning of things was good; surely, the end is the best.2. Thinking right, make us good; thinking Heaven, gives us joy; thinking God; makes us wise.3. The past was the lessons…Continue

Started by Christoffer. Last reply by Immortal Melvyn M. Lusterio May 6, 2016. 1 Reply 1 Like

You need to be a member of ~ KING SOLOMON ~ ALCHEMY & MAGIC ~ to add comments!

Thanks for your invitation to join this magic group ...

I love to go through the subject...